People were actually smaller in the Middle Ages, and clear examples of this are everywhere in old Bremen. The doors and windows are so small, it gives the area a ‘Fairy-Tale’ atmosphere.

Unreal, like a Hollywood or Disney movie set – better though, because this was not only real, but filled with hundreds of years of history, waiting to be encountered in every direction. Spectacular architecture, primarily from the 1500’s.

We were fortunate to be there very early in the morning, when only the first few souls were daring to begin their daily business.

As I am looking, I imagine back to the time when these buildings were constructed, before sanitation, before electricity.

Dark, narrow cobblestone streets crowded with garbage, human excrement, rotting food, dead animals, horses packed with goods, rats and people. Back when, at a certain time of day (10pm in Edinburgh, Scotland), everyone would dump their daily waste out windows to the streets below. 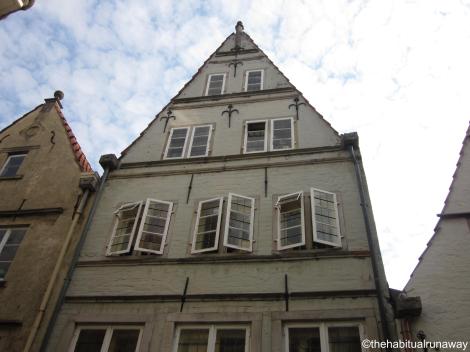 With nothing but the rain to wash the filth of thousands away, the streets were lined and piled with festering, diseased sludge. The ‘high-heel‘ was developed at this time, specifically to keep ones clothing out of the thick mire.

During the Middle Ages, both men and women would wear patten, or wooden soles, that were clearly a precursor to the high heel. Pattens would attach to fragile and expensive shoes to keep them out of the mud and other street debris when walking outdoors.

It would have been chaotic, smelly, at times dangerous and very, very crowded. I might not have appreciated it as much back then!

Thankfully, it is a new era, and Bremen will go down in my notes as a personal favourite. We headed out of the area via a newer, well used (and not so nice) narrow laneway that was covered in graffiti. 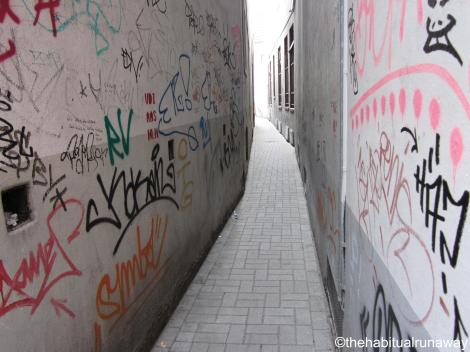 It was nice of the artists to keep their ‘art’ out of the lanes of the Medieval section, respectful. Now to find the car and our way to the Netherlands…