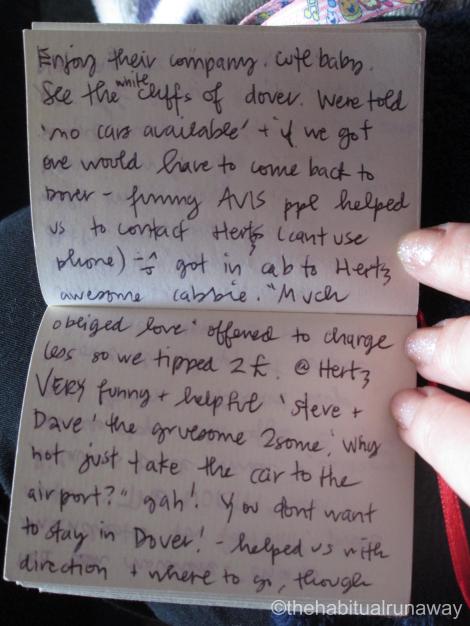 Our journey traversing from France to Scotland was just as entertaining as the rest of our tour. Of course it was not as easy as we had thought it would be, but with the help of many locals, we managed just fine.

I would however, recommend planning your way off of continental Europe.

Somewhere along the way we found a detailed map, left at a roadside stop on top of a garbage can. My husband picked it up and brought it to show me.

Initially I didn’t realize what a treasure the Universe had presented us with (‘what are you doing bringing me papers out of the garbage can?!’), but it would only take a few moments for me to figure it out.

Said map of the UK was so detailed that it showed stone circles, Pagan/Druid/Celtic monuments and spiritual sites, ancient burial grounds, battle sites, castles, clan regions – on and on and on.

With this fantastic discovery, we would be able to check out (spiritually) significant sites throughout the UK – places we simply could not have found otherwise.

Of course we brought the magic map home to Canada with us, and it will head back to the UK on all of our future tours – of which there will be many.

FINALLY we had made it to Scotland (and in one piece!), the home of my heritage. My mother tells me a beautiful, story about how we ended up Canadians instead of Scots.

My great Gran, a Forbes from Aberdeenshire, was sent across alone with her infant son when she was just a teenager. Having a wild sense of adventure, and an unplanned and out-of-wedlock pregnancy, she took off by boat to Canada, never to be seen by her Scottish family again.

Granny Jean did marry a decent man quite hastily upon her arrival to Canada, and built a nice stable life for herself and her additional offspring. They even managed to culminate some financial prosperity.

I wish I knew more about my family history, but for now knowing my clan would suffice. We were at least going to check out some Forbes castles and territory.

To think, if it weren’t for an adventurous Gran and an unplanned pregnancy, I would be Scottish!

Not only did we survive our harrowing night, but we also found an exciting gift along the way. It was pretty clear to me that the ‘Universe’ had our backs (thank you!).

Now to my favourite destination – Scotland!

5 responses to “Crossing France to Scotland – The Notes”

Error: Twitter did not respond. Please wait a few minutes and refresh this page.