We only had a 5 minute drive to the ruins of castle Urquhart – but spent more than four hours sleeping off our two Scottish drinks to get there! I suspect we could have just walked there and saved ourselves some time.

We arrived at Urquhart just minutes before its closing, but decided to pay the entry fee and take a tour regardless.

I would have been disappointed if we hadn’t made it in – primarily because we allowed alcohol to take over part of our tour (though we had no idea it would go down that way!).

13th century Urquhart is located just outside the village of Drumnadrochit. 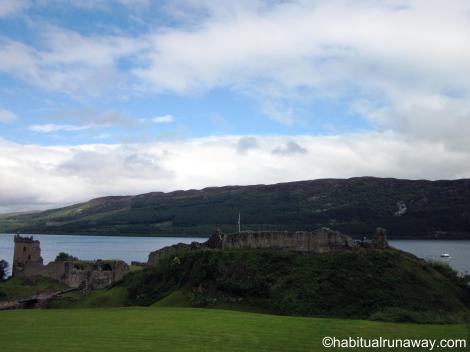 It has been the location of many clan battles and important historical events.

In the late 1200’s Sir Alexander Forbes retook the castle for Scotland, and later Urquhart played an important role in the wars of Scottish independence. 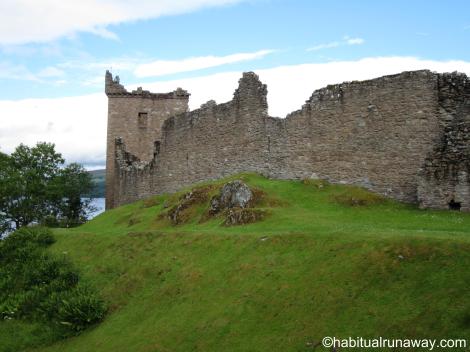 During that time, it was held as a royal castle before being given to the Grant clan in 1509, on the condition that they would rebuild.

The Grants held this great seat of power for more than 100 years before it was captured by Covenanters in 1644.

In the late 1600’s Urquhart was intentionally destroyed by government forces to prevent its use by Jacobites.

An archeological excavation in the mid 1980’s showed activity on the site of Urquhart from the 400’s (AD), and certainly the castle itself was built before its first recorded historical reference in the 1200’s – as that first reference was in regards to a war with intent to capture the (already built) castle.

Though it would be considered graffiti, the etched signatures covering a prominent wall of Urquhart are a detail not to be missed.

Primarily from the 1800’s, many of the signatures include a profession and some even a clan.

When Urquhart was finally abandoned in the 1600’s and left to the people of the Glen, they removed much of the stonework to rebuild their homes.

The castle had been the site of so much trauma and sorrow, for so many generations, that the local people took comfort in the symbolic reconstruction of their communities using its stone. 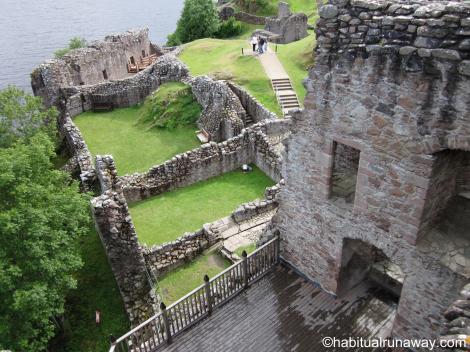 There is a beautiful retelling of the incredible history of Urquhart at aboutscotland.com.

Many (many!) additional photos in the slideshow.