Fort Augustus is a quaint little village of just over 600, located at the foot of the Loch Ness.

We had planned to stop here to eat a meal but were turned off by the first restaurant we happened upon – we realized we weren’t really up to enjoying authentic Scottish fare – mushy peas and multi coloured ‘puddings’ (the definition of pudding is very different in Canada than in Scotland!).

We decided to head to a grocery store and pick up some picnic type foods – cheeses, breads, fruits and meats – that could be enjoyed on one of the many local scenic benches.

It was a beautiful sunny day – not too hot. The heat and I are not on entirely friendly terms.

Maybe that’s another reason I am a big fan of Scotland, it is more like here – BC, Canada – in that the ocean plays a big part in its climate. Cooler summers, warmer winters.

The economy of Fort Augustus is heavily reliant upon tourism. Really there wasn’t much nearby aside from the Loch, Urquhart and a spattering of teeny villages. For Scotland, this is isolated.

The pleasant little town is clean and perfectly manicured, and the locals friendly, and generally appreciative of foreign visitors.

There are plenty of public spaces to enjoy, walking paths, benches and even boat tours of the Ness, if you desire. 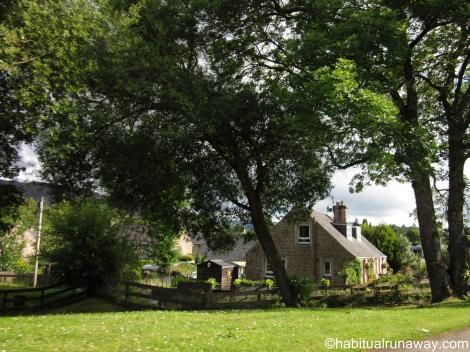 The history of Fort Augustus is incredibly varied, and almost confusing. It has had a few name changes and multiple ownership changes both through war and financial trade.

At one point the land was even granted to the Benedictine Order. The monks established an Abbey and a school – the latter operating until 1993.

I ‘accidentally’ lifted a tea spoon from the coffee stand at the grocery store.

Ok, maybe it wasn’t entirely accidental, but after slurping yoghurt directly from its cup, doling spreads literally by hand, eating cheese straight from its package and stirring hot beverages with my index finger – for a few weeks, I figured one metal utensil would be of great assistance!

Upon the spoons return to Canada, it took a primary position in my utensil collection and has had its story told over and over (a famous spoon here in Canada!);

‘Hey Look, this is my Scottish Spoon – I got it in the Highlands, in a really cute town called Fort Augustus.’

I don’t think it longs to be home with its thousand replica brethren, and I don’t think its original parent even knows of its disappearance. I would bet it’s happy here, being the only one of its kind and getting lots of attention for its heritage.

Regardless, a teeny twinge of guilt has nudged at me since, and so, I confess!

Now that we had eaten and done more relaxing in the Highlands than on our entire trip thus far, it was time to head to the ferry to make our way to Ireland. We still had a bit of a drive to go to get to Troon, where we were told we could get the boat to Belfast….

Of course, it wouldn’t be that easy!

2 responses to “Fort Augustus and a Stolen Spoon”