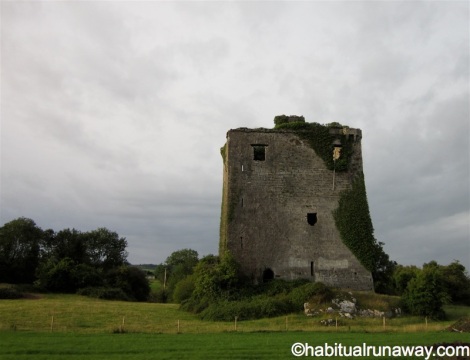 Our near death experience at the Cliffs of Moher wore me out (to say the least), so I took a nap while the husband drove. Little did I know how big a mistake that would be.

We started driving to end up lost, deep in the south of Ireland. We had driven from Clare (far left) to Dublin (far right) down to Wexford (way south – though I don’t know why) and then had to double back up (North) to Dublin (furthest east). By this time we were cranky and exhausted and entirely done with Ireland.

It was late and we were NOT going to pay for another overpriced hotel in this country, as the last one cost us more than $200 and was under-serviced, unclean and unfriendly.

We passed some significant ruins and a few functioning castles along the N18, including the much revered Bunratty Castle (located in Bunratty), now famous for its medieval banquets. The site was initially developed in the 900’s by Viking traders and, according to Wikipedia, in 1270 a fortress was built named ‘Motte and Bailey Castle’.

So far we had spent significantly more money traversing Ireland than we did Scotland – where we spent much more time.

Ireland is expensive! I felt compassion for the common Irish who (in general) are in the midst of a long standing financial ‘situation’. How do they afford anything? I know that the wage rates are similar to (less expensive) Canada. Perhaps this is part of the cause of the strife that regularly afflicts Ireland.

Though I did find Irish clothing to be quite cheap – but you can’t eat clothing, and you can’t sleep under its roof either.

We headed back up to Dublin after many hours driving back and forth, and spent the night sleeping in the ferry parking lot, as we had done before.

According to all references, we were to head out on the next ferry at 8am. Not so in actuality. For whatever unexplained reason, the ferry would not be departing until 1:30 in the afternoon. We had some time to kill in Dublin. 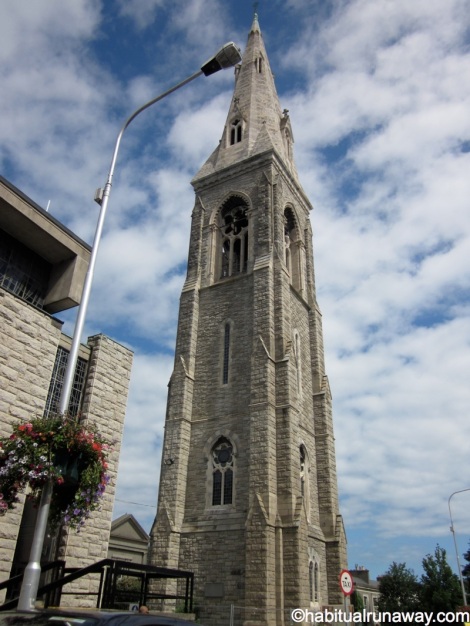 I have been here before. I stayed for a week on a previous tour. During that week travelling alone, I was bitten twice on separate occasions – on the face – by random drunken Irishmen who thought they were being ‘cute’ (NOT kidding).

I was accosted and followed and pursued by the locals, and actually spent a few days alone hiding in my hostel room – overwhelmed by the courtship aggression (stories for later). So Dublin and I had a history, and I still wasn’t quite ready to let it go. 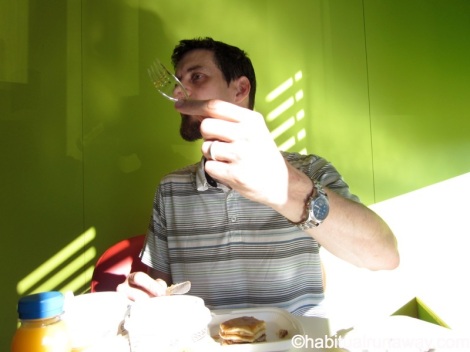 We had some breakfast and toured the mall. I bought a new suitcase (that is still my favourite), to house all of our extra souvenir junk. Remember, we had travelled out for the month with only a small backpack each – no room for additional trinkets. That didn’t stop me from collecting souvenirs though!

Finally it was time to ‘get off this damned island’ as my husband so poetically stated, and we boarded the (expensive) ferry to Holyhead, Anglesey Wales.

We had lost our tire, been nearly run off the single lane road (multiple times) by tour busses, almost died falling off the Moher, narrowly missed the Orange Riot in Belfast, paid more than $500 CAD to get on and off the Island, and more than $200 for one night in a horrible crap hotel (that’s saying nothing of the cost of gas and food), and drove all night (lost) to all corners of the Island – we were done – and not likely to return.

Sorry Ireland – as gorgeous as you are and as much as I like your people – you are too hardcore for me!

You can follow this tour by heading to the ‘8 Country EU Tour‘ section. Many more photos of Ireland at the Habitual Runaway on Facebook.