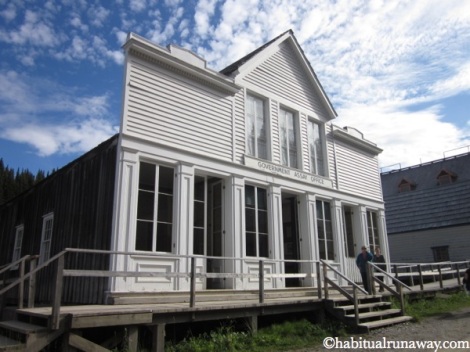 Barkerville started out like every other gold rush town – a ramshackle selection of tents and thrown together, bow over cabins. As more people struck gold in the area and riches grew, so did Barkerville.

Due to the muddy conditions, the businesses were built on posts, elevating them from the sludge, and connecting them via boardwalk.

Until the wagon road was built in 1865, joining Barkerville to the south, all supplies were carried in on the backs of miners or by occasional pack train (horses).

The town was a very exciting place to be at the time. Lots of saloons and dance halls, a theatre and literary society – and people from all corners of the world.

Only the general stores provided food supplies, and as demand increased, prices raised. Meat and dried vegetables ran for a dollar per pound and one could expect to pay as much as $1.25 for as much flour.

To keep perspective, 100 years later we (in Canada) pay an average of less than a dollar per pound of flour. Yes, life was (in many ways) more expensive in Barkerville during the gold rush, than it is today. 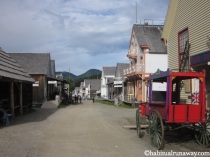 In 1868, Barkerville suffered a great fire. Within six weeks more than 90 buildings had been rebuilt. Board-walks were improved and the main street widened.

By 1880 there were enough children in Barkerville to warrant school development. Though the majority of gold rush residents dispersed by the end of the 1800’s, a population resurgence happened during the depression in the 1930’s.

St. Saviour’s church was once very popular and well attended. Services are still held most days by students from the Anglican church playing the role of Reverend Reynard, who arrived to Barkerville in 1868. The doors opened, to the then incomplete church, two years later.

St. Saviour stands in its original condition, and is one of the few buildings not ravaged by the ‘great fire’. Its gothic architecture includes ‘board and baton’ construction on both the interior and exterior.

The gold rush church is beautifully handcrafted – you can see the 100+ years of wear on the door handles and pew corners, where natural abrasion has occurred on the wood after generations of handling.

Famous gold rush villains sat in these pews among the pious. Everyone was welcome.

We sat alone for a while in the church, enjoying the quiet that its interior offered. A nice respite from the busy downtown. I am sure its patrons felt the same way over a century ago when Barkerville was bustling and somewhat lawless.

The harsh hand of law was present in Barkerville – through infamous Judge Begbie. A Scottish man who had been appointed as judge of the new colony of British Columbia. A man who spent a lot of time sitting in this church contemplating the fate of others under his rule.

With gambling and prostitution legal, his cases were often reserved for the worst of the worst. Legend states that many men were put to death at Judge Begbie’s hands, lending him to be coined ‘the hanging judge’.

He was also a mathematician, environmentalist, artist and opera singer who would occasionally perform in Victoria. He travelled around to various communities, holding court in tents, clearings and even off the back of his donkey. He believed in equality and was the first to convict a European on the testimony of natives alone.

Though Begbie has a sour reputation, records show that he only ordered two men in the Cariboo put to death. The rest seems to be legend. He is interred at Ross Bay Cemetery (remember this post?), in Victoria.

In 1958, the Canadian government decided that Barkerville needed to be preserved, restored, registered as a national historic site and ultimately opened to the public.

There were still a handful of residents living in town at the time and they were offered to be bought out or moved to nearby ‘New Barkerville‘ – a community developed solely for relocation purposes. Most people chose to have their homes relocated.

New Barkerville is an unincorporated settlement and does not show up on maps, though it is located just a kilometre from ‘old Barkerville’. I didn’t even know it existed until recent research. Definitely something new to discover on our next tour – that along with the old Wells/Barkerville Cemetery.

Apparently (thank you again wikipedia!), much like Wells, the homes of New Barkerville are painted in bright, candy colours. The ‘new town’ only has basic services – hydro, spring fed water and dial-up internet – but that doesn’t seem to bother residents.

The dreams that once made Barkerville seem like a virtual Valhalla, have recently resurfaced with the finding of more gold by a junior miner. Currently discussions are underway about what exactly to do with the potential 10.6 million ounces – and who should benefit.

Barkerville has long been held by shareholders, and managed by a company that takes a lot of flack regarding their capabilities. The new find has brought up many old concerns. You can read more about it in this recent financial post article.

Barkerville gold rush 2013 – not sure anyone was expecting that!

You can follow this tour by heading to the ‘Gold Rush Ghost Towns‘ section. Many more photos at the Habitual Runaway on Facebook.