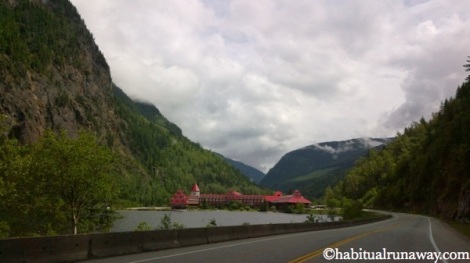 Located along the Trans Canada Highway, 23 km SW of Revelstoke, 3 Valley Gap is a place I have passed by (nearly) a thousand times – without stopping in.

The tedious piece by piece reconstruction, and brilliant town like re-placement has resulted in a fantastic, realistic representation of an ‘old west town’ (…and I am comparing it to the very real Barkerville).

Assumedly because the buildings were authentic, you could smell, see and feel the history in each (or you could just read about it on the plaque located on or near each building!). 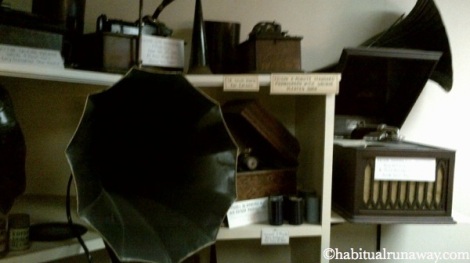 The collection indoors was equally stunning. Gramophones, clothing, trinkets, bottles, toys, books and plenty of other bits. The entry chandelier was quite spectacular too.

There are a variety of buildings located in the heritage ‘ghost town’.

A variety of merchants, schools, Chinese laundry, homesteads, a hotel, jail and halfway house, the dining room, a carpenter and saddlery, an old west duplex, a salon and so on. 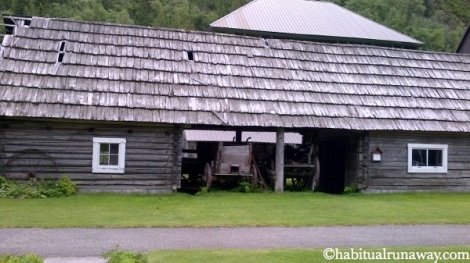 There are so many buildings to peruse and relevant material to read, that it took us hours longer than expected to get through the town. We had to look at everything.

St. Andrews church is one of the 25 reclaimed buildings. To look at it, you would think it had stood in its current location since the beginning of its time.

Quaint landscaping and well trodden paths through the adjacent cemetery add to its appeal, and the authentic look of permanency.

Just down the dirt road is the bottle house salon.

Bottle houses were popular in the wild west. They were cheap to construct and required very little skill. One only needed to make a successful plea to the local saloon and mix up something for mortar.

If you could stack bottles, you could make a bottle home. And you didn’t need a window, as the bottles themselves let in a significant amount of light.

Many of the old bottle homes were constructed using intricate designs and the end result is often almost stained glass like.

According to Wikipedia, the construction of bottle houses dates back to ancient Rome. 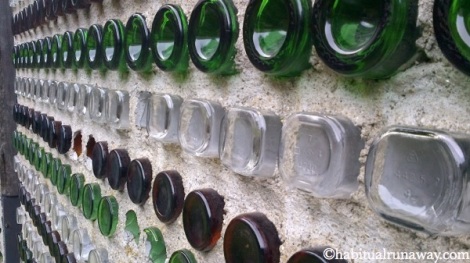 To learn more, a google search will bring you a heap of fascinating results.

I spent hours perusing bottle house photos. Makes me wish (for a second) that I wasn’t floating on the river – if I had even a spec of land I would be building something out of bottles!

There were many reminders of how difficult – and dangerous – life was here 100+ years ago. I found the below photo on the wall and couldn’t help but to be blown away. It was taken on the Crowsnest Pass in 1921.

Imagine making the trek through the mountains on those gravelly under-developed road ways, on those rickety wheels. There were (almost) no service stations. You would have had to carry with you all of the fuel that you would need.

Even now, the pass is treacherous in places. The narrow road drops into a mountainous abyss. In some places it looks to be a thousand feet down.

And people do go over, even in modern times.

It is easy to forget that anyone who made the journey back then would have been a VERY daring adventurer – unafraid of death and dying. Someone with nothing to lose.

There are a few real pieces of history located at the Gap, one of which being the Bellevue Hotel. Once popular and very regal. It was because of buildings like this, that were – and had – fallen in to disrepair, that the original family started their remarkable collection.

No one else was stepping in at the time to preserve the incredible gold rush history. The project started in 1961 after the demise of French Creek (north of Revelstoke), a quaint ghost town once replete with artifacts, now all but non-existent.

There is also an impressive collection of trains in what is supposed to be one of the largest train roundhouses in Canada. It is massive, and filled with trains from all eras that you can board and peruse.

Many in their original state, some refurbished, one decked out as a ghost train. My favourite was the presidential car.

If you are ever driving across the Trans Canada through British Columbia, don’t make the same mistake I did and fail to stop at the 3 Valley Gap.

The mountain view is incredible, the services are plentiful, the ghost town is well worth the entry fee (and more), there is even a small public beach, helicopter tours, boat rentals a convenience store and restaurant.

The owners of the Gap really are providing an essential service in preserving a part of our history that would have otherwise been lost. For that alone I have to give my highest recommendations.

Many additional photos in the slideshow.